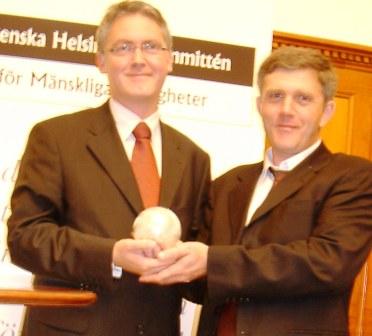 The Swedish organization Forum for Living History awarded Arsen Sakalov, coordinator for the Chehcnya Justice Project, the 2005 Per Anger Prize for his efforts to bring justice to victims of human rights abuse in connection with the conflict in Chechnya.

Since 2001 the Chechnya Justice Project has been implemented by the Stichting Russian Justice Initiative and the organization Pravovaia Initsiativa po Chechne, which was later closed. Arsen Sakalov, as part of the Stichting Russian Justice Initiative, currently represents more than 700 people in 106 cases, 81 of which have been submitted to the European Court of Human Rights.

Arsen Sakalov was nominated to the Per Anger prize by the Swedish Helsinki Committee, which works closely with Arsen Sakalov and the Stichting Russian Justice Initiative.

The Per Anger Prize was established in 2004 by the government of Sweden to honour the memory of Ambassador Per Anger and is awarded for humanism and efforts to promote democracy. The prize is international and is selected by the Swedish organization Living History Forum.

Swedish ambassador Per Anger took the initiative to write a series of protection letters, which saved thousands of Jews in Budapest during the Second World War.

Governing Board and Committees