Information campaign about “Honor killings” of women in the North Caucasus, Russia 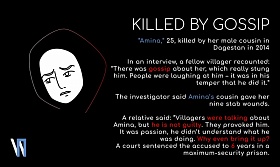 Photo: “Amina,” 25 years-old, killed by her male cousin in Dagestan in 2014. In an interview, a fellow villager recounted: “There was gossip about her. And in company with others this gossip just really stung him. People were laughing at him – and in his temper he went and did this.” According to the investigator, the cousin inflicted nine stab wounds on “Amina.” He took off, leaving her in the house. In an interview, a relative stated: “Men were talking about Amina in the village, but he is not guilty. They provoked him. It was the heat of the moment, he didn’t understand what he was doing. Why even bring it up?” A court sentenced the accused to 6 years in a maximum-security prison. 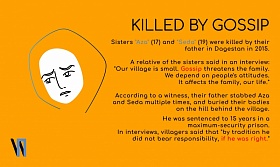 Photo: Sisters "Aza" (17) and "Seda" (19) were killed by their father in Dagestan in 2015. A relative of the sisters said in an interview: "Our village is small. Gossip threatens the family. We depend on people's attitudes. It affects the family, our life." According to a witness, their father stabbed Aza and Seda multiple times, and buried their bodies on the hill behind the village. He was sentenced to 15 years in a maximum-security prison. In interviews, villagers said that "by tradition he did not bear responsibility, if he was right." 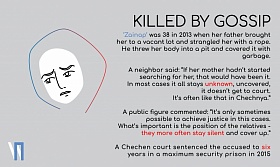 Photo: Zainap was 38 in 2013 when her father brought her to a vacant lot and strangled her with a rope. He threw her body into a pit and covered it with garbage. A neighbor said: “If her mother hadn’t started searching for her, that would have been it. In most cases it all stays unknown, uncovered, it doesn’t get to court. It’s often like that in Chechnya.”
A public figure commented: “It’s only sometimes possible to achieve justice in this cases. What’s important is the position of the relatives - they more often stay silent and cover up.” A Chechen court sentenced the accused to six years in a maximum security prison in 2015. 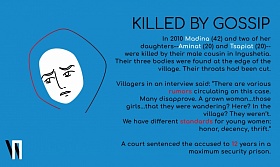 Photo: In 2010 Madina (42) and two of her daughters--Aminat (20) and Tsapiat (20)--were killed by their male cousin in Ingushetia. Their three bodies were found at the edge of the village. Their throats had been cut. Villagers in an interview said: “There are various rumors circulating on this case. Many disapprove. A grown woman...those girls...that they were wandering? Here? In the village? They weren’t. We have different standards for young women: honor, decency, thrift.” A court sentenced the accused to 12 years in a maximum security prison. 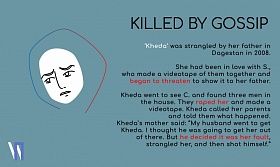 Photo: Kheda was strangled by her father in Dagestan in 2008. She had been in love with S., who made a videotape of them together and began to threaten to show it to her father. Kheda went to see C. and found three men in the house. They raped her and made a videotape. Kheda called her parents and told them what happened. Kheda’s mother said: “My husband went to get Kheda. I thought he was going to get her out of there. But he decided it was her fault, strangled her, and then shot himself.” Kheda’s father was found guilty, but the case was closed due to his death. The authorities refused to open a criminal case against S. 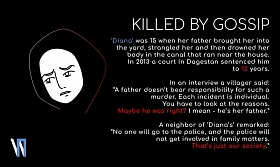 Photo: Diana was 15 when her father brought her into the yard, strangled her and then drowned her body in the canal that ran near the house. In 2013 a court in Dagestan sentenced him to 12 years. In an interview a villager said: “A father doesn’t bear responsibility for such a murder. Each incident is individual. You have to look at the reasons. Maybe he was right? I mean - he’s her father.” A neighbor of Diana’s remarked: “No one will go to the police, and the police will not get involved in family matters. That’s just our society.”

Photo: Raisa was killed in 2010 in Chechnya by a male cousin: he stabbed her and then buried her body in a strip of forest. Residents of Raisa’s village said in interviews: “Murder by relatives happens fairly frequently. But they usually have a reason for doing it. Or just a suspicion. They fear for their honor. A woman answers for the honor of her kin. A woman must obey what she is told. That’s how our women are.” Raisa was considered “missing” for many years. Six years later, her cousin confessed and was sentenced to six years. 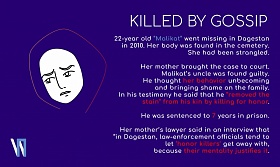 Photo: 22-year old “Malikat” went missing in Dagestan in 2010. Her body was found in the cemetery. She had been strangled. Her mother brought the case to court. Malikat’s uncle was found guilty. He thought her behavior unbecoming and bringing shame on the family. In his testimony he said that he “removed the stain” from his kin by killing for honor. He was sentenced to 7 years in prison. Her mother’s lawyer said in an interview that “in Dagestan, law-enforcement officials tend to let ‘honor killers’ get away with, because their mentality justifies it. 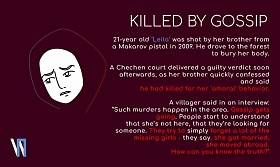 Photo: 21-year old Leila was shot by her brother from a Makarov pistol in 2009. He drove to the forest to bury her body. A Chechen court delivered a guilty verdict soon afterwards, as her brother quickly confessed and said he had killed for her ‘amoral’ behavior. A villager said in an interview: “Such murders happen in the area. Gossip gets going. People start to understand that she’s not here, that they’re looking for someone. They try to simply forget a lot of the missing girls - they say, she got married, she moved abroad. How can you know the truth?” 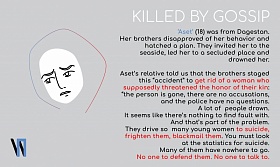 Photo: Aset (18) was from Dagestan. Her brothers disapproved of her behavior and hatched a plan. They invited her to the seaside, led her to a secluded place and drowned her. Aset’s relative told us that the brothers staged this “accident” to get rid of a woman who supposedly threatened the honor of their kin: “the person is gone, there are no accusations, and the police have no questions. A lot of  people drown. It seems like there’s nothing to find fault with. And that’s part of the problem. They drive so  many young women to suicide, frighten them, blackmail them. You must look at the statistics for suicide. Many of them have nowhere to go. No one to defend them. No one to talk to.